While I was at LDOE I designed a system to capture the 504 status for students in Louisiana.  By now we have 2 or three years of data.  From my discussions with the state liaison and even people within and outside the department of education it is apparent that Non-public Schools, many charters and a number of school districts do everything they can to discourage students from claiming to have 504 disabilities.  This discouragement will take many forms but usually results in the students needing to be withdrawn and enrolled elsewhere, being underserved and discriminated against, or parents having to take on a greater financial burden to ensure their children receive supplementary services, tutors, etc.

Some of you may not really know what “504” means.  I didn’t before i started working on the project to collect data on this situation.  Before I started designing the system for collecting this data I did a little homework on what it is.   504 refers to a section of the American’s With Disabilities Act (ADA) that prohibits schools that receive federal funding from discriminating on the basis of children’s disabilities if the schools receive federal funding.  (Even though most non-pubic schools don’t receive traditional per-pupil funding, they may receive other types of federal funding for technology and nutrition programs for instance.)

With Louisiana’s new laws allowing any non-public school to receive local, state and federal funding – non-public schools must be held to the same standard as pubic schools in providing services for disabled students covered under 504 or IDEA (Special Education.) or be in violation of federal law.  Many of these schools probably don’t realize this yet, so this issue will need to be made more public and to prevent non-public schools from denying less desirable (more challenging) students from enrolling and remaining enrolled.

Additionally, based on the statistics I viewed, (and backed up by anecdotal accounts relayed to me) that a number of districts refuse to provide the same level of services that most of their peers provide.  When you have most districts identifying around 5%  of their students as having a 504 disability and several large districts reporting rates of less than a tenth of a percent in a like sized district. . . that would seem to warrant further investigation and possible sanctions and corrective actions.  Unfortunately the Louisiana Department of Education has been instructed by the past two Superintendents of Education (Paul Pastorek and John White) that LDOE is no longer going to be involved in overseeing compliance issues (even though the federal government provides funding for positions for that purpose that LDOE fills).  Therefore outside groups will need to take an interest in this data and pushing for greater oversight and equality for disabled students.

If you are still bewildered by the difference between Special Education(IDEA) children and 504 disabled children this graphic and link may provide some insight. 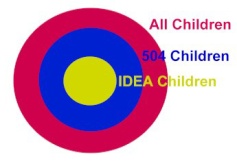 In order to achieve these goals people need to start writing their legislator and the Louisiana Department of Education to get them to release data on 504 children.  If they can start tracking and reporting this count publicly it will become readily apparent which districts take section 504 of the American’s with Disabilities act seriously, and which ones are dodging their obligations.

It’s also worth noting that Louisiana’s Value Added teacher evaluation system doesn’t factor in students defined as having 504 disabilities.  Teachers are, or soon will be, fired for not improving test scores for faster for students who may have dyslexia and ADHD at the same expected rate as students without those handicaps.  If I was a teacher with a lot of 504 students in my class, I would demand LDOE update the Value added model to accommodate scoring adjustments to take into account students with these types of disabilities.