Oops, John White did it again. (He lost our children.)

John White is trying very hard to keep data from the general public and researchers. He even passed a number of edicts when he first came to DOE that forbade LDE staff from communicating with school districts via any method other than a vetted weekly or bi-weekly newsletter. I’ve been told by numerous data coordinators that many of them have no ideas when deadlines are coming, when changes made to the system, when they have problems with their data, or even when webinars are scheduled.

Another one of these commandments was that no data of any sort could be released by anyone other than his public relations officials, and those releases were usually of the PR kind, short on facts, context and details and big on puffery. We were actually told in person (so there would be no e-mail record) that we would not be providing data to hostile groups, and that anyone who requested data (even data already available on our website) must be sent to Public Relations, so they could put the requestor in the proper context and mindset to understand the data. (People I sent to PR told me later they were usually pointed to different data than what they were requesting or told the data did not exist – even though is almost always did.)

DOE used to publish more than 10 years of enrollment data, which is used by demographers for budget projections, charities and non-profits for resource allocations, other state agencies for various state and federal reporting needs and programs, but DOE has decided to use FERPA to start concealing as much detailed data as they can. However if you are persistent and knowledgeable enough you can still piece together quite a bit of data from trolling through various publications within and outside of DOE. These figures all come from internal DOE publications, but they show what happens when an organization blinds itself to spite its face and revels in positive numbers without ever questioning their authenticity. I’d like to claim that John White knowingly is concealing the truth here, but he’s not bright enough to figure this out and lacks an inquisitive mind.  Unfortunately the people he brings in from other states are political science majors, not mathematicians and not interested in anything but perpetuating a myth that the various Reforms being undertaken by DOE are working. In regards to graduate and dropout rates – these reforms actually seem to be working in reverse (but you wouldn’t know it form the data DOE lets you see.)

(Note: One of the ways John White is falsely convincing you is by design. JW is rigging SPS scores for high schools, which I will cover later, but I was already working on this piece when that analysis data rolled in.)

To the untrained eye this chart might just look like a bunch of random unrelated numbers. Allow me to tease some interesting bits out.

According to DOE, the dropout event rate has been drastically decreasing over the past 5 years, most noticeably in the last few. If this were accurate, when you have fewer students dropping out, you would expect more students to graduate (or get a GED or Certificate of Achievement which are the only terminal credentials students can get to prevent becoming a dropout.) Please refer to the next two charts (provided by LDE) illustrating this dramatic decline in dropout rate and count. 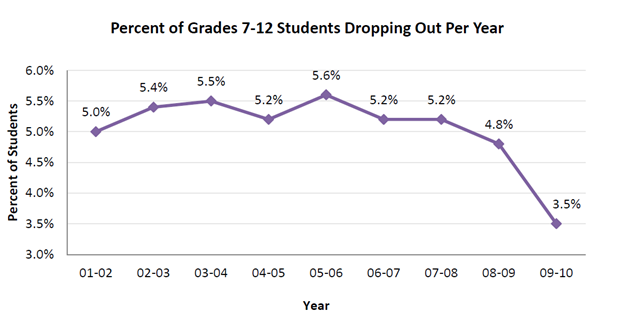 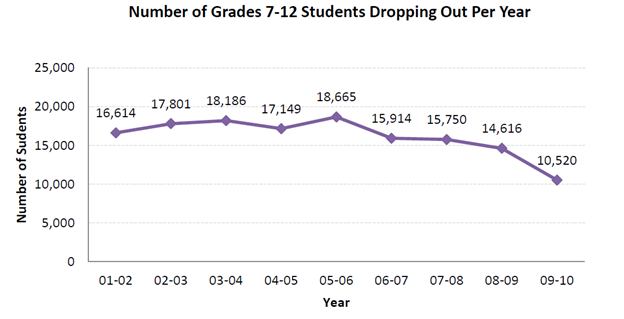 Very impressive, no? According to my calculations, the average number of students dropping out prior the 2005-2006 (Katrina year and pre-reforms and takeovers) was 17,683 students dropping out each year (over a span of 5 years.) Dropout percentages get factored into School Performance Scores (SPS). The lower your dropout rate, the higher your score. The higher your score the less likely you are to be in Academically Unacceptable Status (AUS). Only schools in AUS are eligible for takeover. You might say there would be a certain motivation for tinkering with scores a bit, no?

But let us see if the rest of this trend plays out as you would expect. If fewer students are dropping out, you would expect your GED’s, Diplomas and Certificate’s of Achievement (COAs for SPED students) would increase to compensate for that fact. In fact, since students drop out in grades 7-12, you would expect a decrease in this dropouts (or exiting schools) to have a cumulative exponential effect on counts of completers. (Imagine an hourglass open at the top.  If dropouts are the sand that blows out, the less sand blowing out, the more sand that should make it to the bottom.) What we see below is the percentages of GEDs and COAs barely budging (maybe by a percent for both of them) while dropout percentage has decreased by almost 4%.

That may not seem like a lot of difference, but consider students should only be leaving this calculation around 12th grade, when they finish, if they are not dropping out in grades 7-12. Those numbers should actually be increasing at a much faster rate than dropout numbers are decreasing 5 years into this trend – assuming they were actually staying in school.

But there is one number left that could make up for this discrepancy – graduates.

Now look at this my green chart again. Over a period when our dropouts decreased by a net 22,239 more (than the average 5 years before) our graduates remained relatively level. The average annual increase is in graduates over this time is about -10 (negative 10 folks).

Where did those twenty two thousand students go? In 5 years you would have expected most of those students to have started graduating and adding significantly to the grad total. In fact, over this same time student enrollment has increased by an average of around 5500, year over year. However during this same time, our cumulative enrollment (all students who set foot in any school in a given year has actually declined!

If those students were actually staying in school, while out overall enrollment was increasing, our enrollment in grades 7-12 would have to be increasing, but it’s not!

In fact the opposite appears to be happening. You will notice that we are graduating more students once they reach grade 12, which is improving out cohort numbers, but our overall 12th grade enrollment hasn’t changed appreciably since 2006 and in several years it declined by almost 5%. If you look at our grads as a percentage of our total enrollment, you will notice that the percent of students actually graduating is actually decreasing every year!

If our cohort graduation rate was actually improving like LDE is claiming, if our dropouts were actually decreasing by the 40-50% LDE is claiming on a nifty powerpoint presentation i saw on their site, these trends would be very large, in all the opposite directions!

Based on these numbers I’d estimate we lost an additional 25 to 45 thousand students to dropouts over the past 5 years. I think I know where they’ve gone, but I’d need access to much more than this condensed and sanitized data to show that. Of course this data is a little older than I’d like, but LDE doesn’t want to release any more recent data. If my calculations are correct, it makes me wonder if this shell game is about to collapse on the weight of its own BS.

Until we remove John White, he will continue lying to us and telling us to just “Believe.” I think BESE would like to know this type of info, even if most of BESEwere given their seats by Bobby Jindal’s largesse, I’d like to think most of them owe allegiance to Louisiana and Louisiana school children first, before Bobby, or party.

However, we’ve all seen what Bobby Jindal does to people who don’t parrot the party line. John White was given this job because of his blind allegiance to Bobby. I didn’t always agree with Pastorek, and he had his share of faults, but at least he was a man of principal, integrity, and cared about our children. John White only cares about his career and portraying a positive image to back Jindal’s 2016 election run.

Members of BESE:
Jindal and White will be gone in a few years. They will be done with this State, but you will be left behind to take the blame for the damage they have done. They can hire PR folks to point the finger back at you when this scheme fails and the true plight of Louisiana’s children comes to light.

crazycrawfish I am a former Louisiana Department of Education employee. I was one of the principal student data folks for the better part of a decade. You can find my blog at crazycrawfish.wordpress.com
Published November 17, 2012January 14, 2013

5 thoughts on “Oops, John White did it again. (He lost our children.)”