Some of you may have seen some articles and letters to the editor lately relating to TFA (Teach For America Contracts) To help bring clarity to this issue I have submitted some FOIA (Freedom of Information Act) requests to the Louisiana Department of Education. I believe the questions many people are asking is if TFA has an undue influence on contract issuing, bidding and approval. Before anyone gets the idea in their head that I am anti-TFA people, let me reassure you that I am not. Many of the folks that enter the TFA program are some of the finest people you will ever meet in your life, and I’d say the majority honestly care about doing good, saving students and saving the world through their contributions to society. Those are very admirable goals, and ones I feel I’ve come to share. My wife is a former TFA corps member, and I truly believe knowing her has made me a better, and more caring and empathetic person. Her passion for making the world a better place and her kind heart were some of the qualities that drew me to her. So when I say things about TFA, I do not mean any disrespect for the individual corps members, although I certainly understand where they might be offended. I am referring to the organization in its current form, and how it has come to do “business” how it has matured over the years, rather than how I believe it was originally conceived.

Many of you have seen me say rather unkind things about LDOE, where I used to work with many great and fine people. I have pointed out before, that when I speak or refer negatively about LDOE, I am not referring to most of my colleagues or the previous incarnation of LDOE I worked in, but the usurpers such as John White and his underlings that have invaded and purged the LDOE of its original mission and personnel, reincarnating it as dysfunctional dystopian private agency stuffed to the brim with overpaid inexperienced lackeys that do his bidding, rather than what’s best for Louisiana and its children. (Defending voucher schools teaching students without teachers from DVDs in a gymnasium was a horrible an idea as it sounds and even John White finally agrees, at least a year too late for hundreds of children and hundreds of thousands of taxpayer funds.)

Even some of our finest and most esteemed institutions, such as the Catholic Church, have their Saints and their Satan’s – in the form of predatory pedophile priests that impersonate our pastors while preying on our young. For too long the Catholic Church protected these predators, to their ultimate detriment.  Great harm befell many children who became tragically scarred adults. Protecting false prophets of education like John White will have a similar impact on TFA, jeopardizing their mission and bringing scorn to many fine young adults who entered this program to make a difference.

Now perhaps everything John White and his circle of friends is doing is fine and above board, but considering his previous record (on just about everything), it seems highly unlikely. 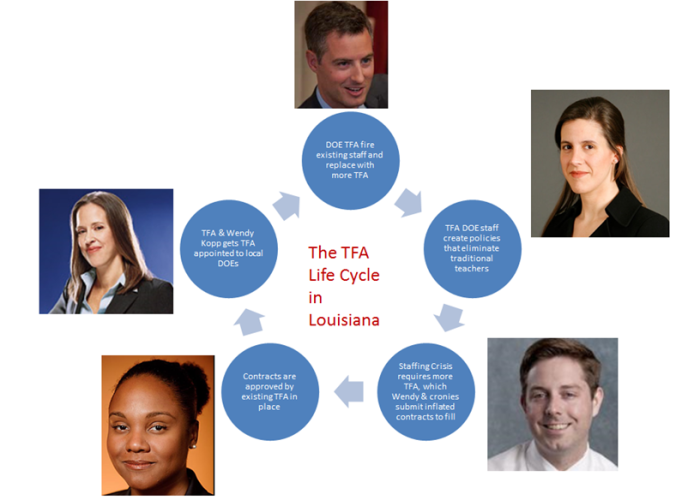 From middle Left to bottom left we have Wendy Kopp, National Head (CEO)of TFA (although she is moving on to form/lead an international version now), John White Louisiana Superintendent of Education, Hanna Dietsch Assistant Superintendent of Talent and Acquisition (and I believe in charge of COMPASS and VAM), Michael Tipton Executive Director for Teach for America in Louisiana, Kira Orange Jones Executive Director for Teach for America in the New Orleans area and also the BESE member representing this area on the state Board of Education.

While the ethics commission did okay Kira Orange Jones to serve on BESE while remaining an active director of TFA, and approving TFA contracts, that are submitted by TFA executives in the TFA lifecycle, it’s not clear the commission understood the complete relationship Kira has with the folks submitting the contracts, nor did they give her a blank check to vote on any measure under any circumstance. For instance, did they realize other TFA folks were creating a need for the contracts by driving out qualified teachers with VAM results that have been documented as being manipulated for at least political/personal gain (as was the case in the Seabaugh Solution situation) but may there have been a monetary incentive as well? I wasn’t sure about the monetary connection until I heard the details on this latest BESE contract that sparked such controversy.   Before I get angry comments telling me about how Mrs. Jones recused herself from voting on this particular TFA contract, I’d like to remind my readers it’s easy to bench your starters when the game score and outcome is already decided before it’s started.  What will be interesting to see is if Jones continues to recuse herself if board membership became less lopsided than the 9/2 decisions we see on almost every agenda item, or the 8/2 decisions when Jones recuses herself.

However, as bad as this seems, if the services being provided and amounts being charged were reasonable, and competitively bid, then I would have much less of a problem. However take a look at this contract that recently created a controversy at the June 18th BESE meeting between Lottie Beebe and John White and has been covered vaguely in the Advocate. This is an amendment to a previous no-bid TFA contract for “recruitment” services. The amount of the amendment is $820,000 to recruit up to 25 TFA teachers for New Orleans. If you’re doing the math that comes to 32,800 dollars per recruit assuming they place 25 recruits. This is not the full contract but I see nothing to indicate if this contract will be adjusted on a prorate basis, or if TFA only manages to recruit 1 teacher they still get the 820,000 dollars. My understanding is this is in addition to the placement fee of up to 5,000 dollars each school district much pay to employ a TFA teacher. That would make the total recruitment cost 37,800 dollars per teacher. We have approximately 47,000 teachers in Louisiana. Michael Tipton, executive director for TFA’s in Louisiana, has reported as many as 525, or 1%, are TFA recruits. If you multiply the 37,800 dollars by 525 the fees TFA may be raking in off of their “placement” services we now need under John White comes to close to 20 million. Most TFA recruits only stay 2 years, and according to this contract, even though we paid 320k to recruit 23 teachers last year, some of that 820,000 is needed to “guarantee” they stay recruited. After all, it would be a shame if something happened to all our TFA teachers in these high risk areas, right? Approximately 400,000 per 25 teachers per year seems to cover the bill, or 800,000 for 2 years to keep those previously placed teachers stay “placed.”

Below is a text extract of the contract: It is a public record and you can find it with the directions I’ve enclosed. I have no idea how many more “recruitment” contracts DOE has with TFA, but I’m sure this isn’t the only one.

(With selective vendor only)

with selective vendor only)

Recovery School District is being taught by a qualified, driven, and engaging teacher.

federal and state requirements for “highly qualified” teacher status. This contract will also allow for the retention of 23

second-year teachers through the 2013-14 school year.

Does the contract assist in complying with state and/or federal regulation or laws?

Yes – aligns the RSD with BESE funding guidelines in accordance with 8(g).

So with the implementation of COMPASS and VAM our local school districts will be forced to fire as many as 10% of our teachers, after 2 years of ineffective ratings. These teacher evaluations are based on curves, so the lowest 10% are ineffective, by definition. I wonder where we will get so many new teachers, as many as 10% more every year? I have 200 million reasons to think the TFA will be more than happy to help us out there, and every year. Since most TFA recruits only stay 2 years as teachers, every 2 years they will need replacing, and the lowest 10% of teachers will come from the remaining educators. Under this arrangement TFA could grab as much as 25% marketshare in our teaching corps. I wonder what they will demand we pay then when most of our original teachers are driven off replaced with a perpetual temp teaching force?

I haven’t gotten a response yet except to say they will notify me when they manage to locate my records.  I promised to publish what I asked for so they couldn’t claim they haven’t seen it at the next BESE meeting. John White has made it a habit of promising everyone that he will provide documentation while the cameras are rolling, but promptly forgets everyone again when he leaves the room until the next meeting. He’s hoping we will stop asking and take the hint that he’s not telling, but perhaps you can ask him to?

Here is the text of my FOIA:

Please provide a copy of the detailed contract between TFA (Teach For America) and RSD referred to and voted upon at the June 18th  2013 BESE meeting for 1.2 million dollars that was amended from a previous contract of approximately 380 thousand dollars that included an 820k amendment for recruitment of 25 teachers.  (I believe this contract was summarized and listed in contracts over 50k, item 6.4 of the BESE Finance agenda.)

Please provide details on any contracts or incentivization packages offered or provided to top graduates in any Louisiana State university teaching programs since January 1st, 2012 and any correspondence with University Deans of education related to recruiting top candidates.  (An answer of no such documentation exists is an acceptable answer.)

Please provide any documentation, contracts, or salary schedules, about signing bonuses school districts must pay to recruit TFA teachers which I am told can range from 3000 – 5000 dollars.

Please provide a list of all LDOE, RSD, or BESE department staff, their titles, dates of hire, and salaries that submitted SF10’s or resume’s citing TFA experience, or any staff members known to have previously been affiliated with TFA in any capacity.

13 thoughts on “Will John White prove to be the downfall of TFA, or just Louisiana?”