Common Core is failing the “parent test” in Louisiana

You might not know this from reading the newspapers or tuning into your televisions programs that have been bought out by Common Core supporters, but if you’re a parent and you’ve been listening to your neighbors and teachers and using your eyes you know what you are seeing is not what you are being misled to believe. October 17th John White tried to pay a stop to Mandeville High to rally support for Common Core, but what he thought would be a an easy slam dunk of a conversation turned into a serious embarrassment – that was not covered by any newspaper articles I’ve seen. The road leading into the High School, Skipper Drive was lined with signs like the ones below and tells the story of how that visit went.

It was reported to me that rather than meet with the entire school, John White held a secret private meeting at the school and then went out to dinner with some local legislators, where they all sat around drinking sugary flavored drinks, and agreeing with each other.

Local media was briefed on this plan ahead of time, but chose not to run anything on the opposition to Common Core. However at urging from John White and the Louisiana Department of Education, the Advocate started making inquiries of the property owners if their local ordinances and neighborhood associations permitted yard signs like this. I would cancel my subscription to the Advocate if anyone still has one. That type of intimidation and bullying is ridiculous and truly shows how subservient our local media has become to our local politicians.

If I was working for the Advocate I would be embarrassed, although I’m sure I would have been fired a long time ago for trying to report the truth instead of the lies my owners wanted me to report to appease local politicians. If you were wondering why the Advocate only reports one sided reports of the Common Core situation, the reason is money and politics. I make no money from my blog (and have turned down offers of financial support in the past – although if Bill Gates wanted to give me a million dollars like he has everyone else I’d probably tattoo CCSS on my chest. If you see me wearing one of those I beg you to stop listening to me. . . ) so I am free to report what others are afraid too, or paid not to do.

St Tammany is not the only parish where protests are taking place. I have heard of similar events in Vermillion and Terrebonne. An “all in one” sign is apparently circulating in Terrebonne along with magnets and decals.

In Caddo and the northern part of our state the conservative Louisiana Power Coalition and Diane Long is making an impression and a stand against Common Core.

If you agree, please mail Dues and/or Donations to:

Learn about us at

In the central part of our state the Acadiana Patriots, and their allies, are taking a stand and going community to community, library, to town hall, to community center informing parents of the poorly contrived Common Core. I have some very interesting footage of some of their meetings I will try and post later. This group was also in involved in the rally at the LDOE a few weeks back that I attended.

On Facebook I’ve been invited to a half dozen local anti-Common Core groups from different parishes.

Our Teachers Unions, LAE and LFT are opposed to LDOE’s ill-conceived rollout of Common Core.

The only people that seem to be in favor of Common Core are Exxon, LDOE and the Advocate. So put that newspaper in the trashcan, pass by that Exxon station, and open your eyes and ears so you can see and hear the truth. Common Core is under siege, and for good reason, and no amount of printed lies and staged news conferences will change that. The only people that still think Common Core is a great idea for our children have been spending too much time with the Common Core Kool-Aid man. 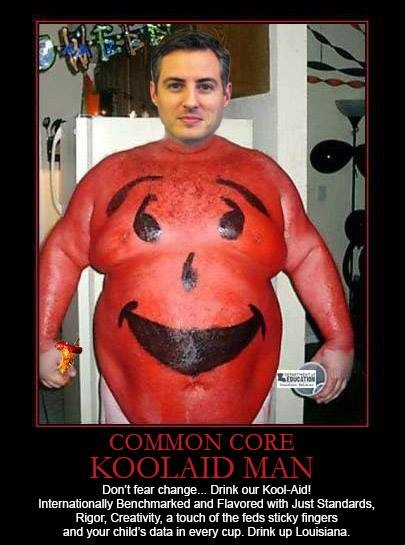 Back away from the punch, Louisiana. This guy does not belong around our children.

crazycrawfish I am a former Louisiana Department of Education employee. I was one of the principal student data folks for the better part of a decade. You can find my blog at crazycrawfish.wordpress.com
Published October 24, 2013October 24, 2013