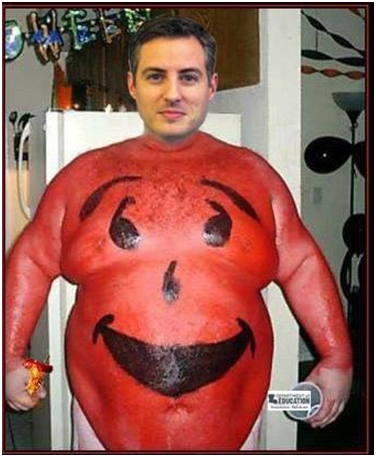 Figure 1 (What White wears when his staffers leave office)

John White has some great news for us! RSD is doing awesome and so are all the charters in New Orleans. I guess its time to convert all our schools to charters folks. He finally proved his methodology works.

Last year, While claimed credit for improving 95% of our High Schools by increasing our expectations and rigor and claiming High Schools rose to meet the challenge. Most other mathematicians explained at some length and analysis that the increase was entirely due to a change in the SPS formula being used, and a change to a new test that resulted in 10-15 points of grade inflation, which White subsequently acknowledged about 6 months later during testimony given to the state legislature, but that was long after receiving many accolades and a positive performance review based on the improvement in our schools.

This year the formula changed drastically again. However rather than worry about people discovering the point inflation, John White has been completely upfront with adding up to 10 bonus points to SPS scores.

Some things to note that this slide doesn’t reveal. Schools can get the maximum bonus points based off of just 100 students, or 100 % of the underperforming population improving a a level from last year. If students improve in multiple categories, like reading and math, then you get .1 points for both categories they moved up in. So 50 kids improving out of 2000 in a school could net 10 bonus points( a whole grade level), even if the rest of the student body declines or tests at the lowest level. In a small school with only 10 students below grade level a school could improve just 5 of them in both categories to get the max 10 points for their entire school.

Bonus points are not the only way a school can manipulate their results. Another factor is grad rate and grad index or high schools. RSD schools and charters have learned that if they exit kids with the right codes they do not factor into the graduate denominator or dropout denominator. Note how John McDonogh was able to improve their grade rate from 34% in 2006 to 90% in 2008 while graduating almost the exact same number of students. If fewer failing students stay at your school, your grad rate goes up, which impacts SPS scores. RSD, Jefferson and several other favored districts are never audited by the LDOE by order of John White. There is no need to erase test scores when you can simply change a single exit code on a single record and the state never audits them, regardless of how ridiculous the data being reported.

(the below is from an internally circulated LDOE document)

From one of my former accountability commenters:

. . .Graduation data. You and Schneider and a few others have been randomly tossing around the term “bogus” for a few days, but that grad data IS bogus. There’s a handful of high schools that is on the “AUDIT FIRST” list, but because most are in the RSD, no one has been audited. So schools in Vermilion, Lafayette, Jennings, Jefferson (for certain) get away with cheating so none of the RSD schools get caught.

70% of the kids at this school are not passing their end of course exams they need to pass to graduate. 55% of them score at the lowest possible level. This far surpasses the admittedly low-level of performance of New Orleans schools, pre-RSD. However, this school is considered a “success” based on the new formula devised by White. Success that has been touted by Leslie Jacobs, who devised this strategy originally. Only a little more than half of the students graduate from this school, and that’s not soubt with the assistance of subterfuge.

Most New Orleans schools were classified as failing pre-Katrina, but even then the average for New Orleans was about 55% below grade level, not 70%. 55% is just the students this “non-failing” school has in the lowest category of achievement.

Here is an example of another non-failing school, thanks to John White’s new formula and “bonus” points.

This school has 65% of their student performing below grade level. This is 8 years after Katrina. These kids have never been anywhere but an RSD or charter school in New Orleans. They are considered successful now, because RSD manages them, and because John White and education reformers need a win to continue their privatization. After 8 years, John White cannot afford for this experiment to “fail”. This is what RSD has achieved even after spending 2 to 5 times as much money (after private, state, federal grants and increased funding) on New Orleans students as students in the rest of Louisiana.

You might be getting the impression that the old scale was comparable to the 2004-2005 scale.

If you are outside of New Orleans you are under less scrutiny so most RSD schools are still F’s, like this one in St Helena that has been in RSD hands long enough that the 70% below grade level performance is entirely their own doing. There are no other middle schools or 5-8 grades in St Helena, therefore no shuffling possible. A 5-8 school doesn’t have a grad rate to falsify, so they can’t gain points by rigging that system. 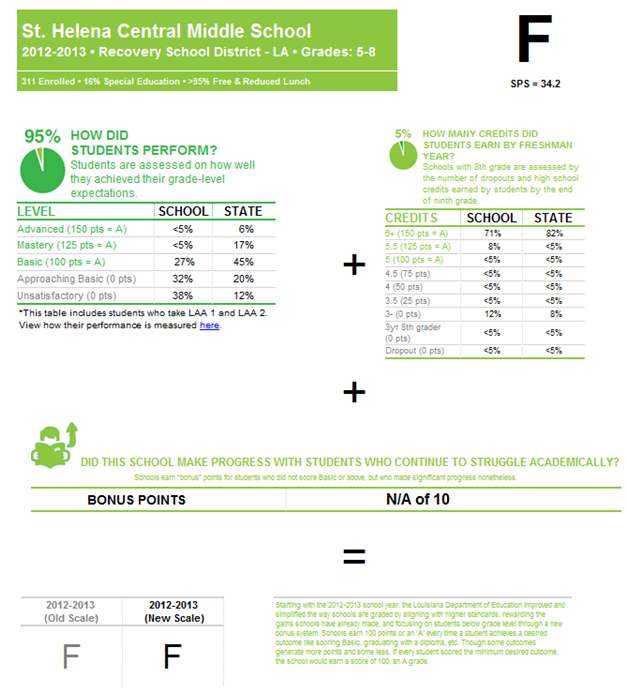 Last year John White boosted all the High Schools with inflated scores to claim his increased rigor and policies were successful and the press and BESE saluted his efforts. This year most of those schools have fallen back a grade level or two and the press and BESE are silent. This year many elementary schools, and 2/3rds of New Orleans’s schools got boosts from bonus points that lifted them all up a grade level (or sometimes 2) and LDOE and the press have lavished praise on John White and his reforms.

Next year will they drop again and will the press remain silent? Perhaps. I wonder if some RSD Middle schools like RSD in St Helena will be getting some bonus points to improve their SPS score, while only 30% of their children are performing on grade level, like so many schools in New Orleans now “defined” as successful by a new score and bonus point booster shot? It’s hard to know, but what I do know is that what John White delivered to us just before Halloween this year is just another trick, not a treat, and certainly not something that’s good for children.

crazycrawfish I am a former Louisiana Department of Education employee. I was one of the principal student data folks for the better part of a decade. You can find my blog at crazycrawfish.wordpress.com
Published October 31, 2013October 31, 2013