Education Reform in Louisiana: A PAC of Lies and Liars.

It’s been a few weeks since the final BESE elections wrapped up in Louisiana.

(BESE is Louisiana’s elected state school board. The board as 8 elected positions and 3 appointed by the Governor and is responsible for setting policy for all public schools, private schools, charter schools and homeschool programs in the state as well as defining the MFP, a funding formula for public schools. A BESE position does not come with a salary but does provide a small stipend and a laptop or iPad to communicate with the state e-mail system using the state assigned e-mail address.

BESE meets every other month for 2 days for regularly scheduled meetings and as needed for emergency agenda items. It’s not a glamorous job, no salary, no staff, a lot of filing/qualifying requirements and red tape, and a lot of public scrutiny – but that hasn’t prevented it from becoming the most contentious and expensive position in the state, second only to the Governor’s position in Louisiana.)

The 2015 elections were something of a watershed moment for Louisiana. It was the first year BESE board candidates opposing destructive Education Reform were able to unify across parties, geography (and any other line you can think of) and work to fight against the lies and money of the Ed Reform machine.  Education Reform is sold on the backs of lies about “success”, lies about goals of opponents, and through the perpetuation of firmly discredited myths.

The Ed Reform movement didn’t just lie, they built a campaign machine that ran on the exact diametric opposite of reality.

I will show several examples of how this looks and what it means in the next few posts on this subject. Fortunately I was able to document some of these lies to call people out over the years that follow, and for you, the public, to hold them to their pledges (or admit they were lying POS.)

Here is a commercial Lane Grigsby’s Empower PAC ran against one of the FlipBESE candidates I supported in the 2015 elections.  This was run against a veteran of the Ascension Parish school system who works with children with disabilities, and their families, named Kathy Edmonston.

When I talked to Kathy about this commercial she was quite upset. The extras they use in this video make her out to be an idiot as did the hundreds of thousands of dollars in mailers sent out by local education reform mobster, Empower PAC founder and LABI chairman, Lane Grigsby.  This was just one piece of a out of state billionaire funded coordinated campaign to take part of statement she said during and interview completely out of context and claim she did not believe children should be taught to read or perform math until the third grade. 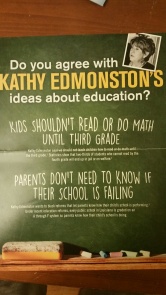 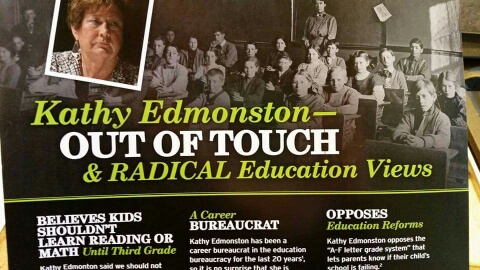 I suppose the depression era black and white photo of gloomy kids is supposed to represent outdated thinking?  I’m not really sure that was a belief back then, but they get points for using some ridiculous over-the-top scare tactics.  (FYI, Ascension Parish is one of our top rated school districts in the state by the ed reformers own grading scale, so I’m pretty sure they must be doing something right.)

Kathy provided the video where Empower and Grigsby chose to libel and slander her education stands from a Frances and Friends broadcast.

If you listen to the clip, Kathy Edmonston actually says the complete opposite of Grigsby and his Empower PAC (funded by Michael Bloomberg, Eli Broad, Jim and Alice Walton) are claiming. She says it essential that kids learn to read and write before third grade and that most of our early efforts should go towards ensuring that goal.  Her observation and critique was that, under Common Core, many kids are getting to third grade unable to read or do simple math.

Selling the exact opposite of the truth: Education Reform’s specialty.

The Education Reform movement is a group of PACs and corporately funded puppet organizations that sell lies to the public.  They lie about their “successes”; they lie about their failures; they lie to create faux failures for others; they lie to support their agenda and attack their detractors to prevent any adult conversations or real critical analysis of their claims from happening.

When I met with Grigsby earlier this year to try and discuss his views and our differences candidly he told me that he doesn’t believe in Democracy because politicians can get entrenched and corrupted as he believes happened in New Orleans.  Lane explained to me that all that really matters these days is who has the most money and who can tell the most convincing lie.

I believe he proved that to be true for the most part in this election cycle.  That may be the most honest thing he’s said to anyone about politics and his worldview in a while. Grigsby and his allies poured more than 4 million dollars worth of lies into this year’s BESE races and won 7 out of the 8 elected seats that prior to the charter school movement were won for less than 10k.

This money is flowing here from supporters, and investors, of/in the charter school industry.  Whether you are a charter supporter or not, it is clear that money from the charter industry has drowned out any voices but their own.  Combine that fact with the compulsive and absurd lying, like that shown here, and you can see why all forms of education (not just public) are really facing a crisis these days. The Education Reform movement has created a real crisis with their policies to replace the faux crisis they sold their new policies on in the first place.

I’m not sure if that is irony, a self-fulfilling prophecy, or maybe just good business?

What I do know is that Education Reform responsible for teaching our kids all the wrong things, both in school, and outside of school by their example.

Unfortunately it’s not just children who are being taught very destructive things.  We are also teaching adults to disrespect Democracy and to defecate on truth as well.

crazycrawfish I am a former Louisiana Department of Education employee. I was one of the principal student data folks for the better part of a decade. You can find my blog at crazycrawfish.wordpress.com
Published December 14, 2015

8 thoughts on “Education Reform in Louisiana: A PAC of Lies and Liars.”